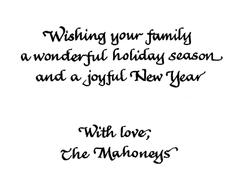 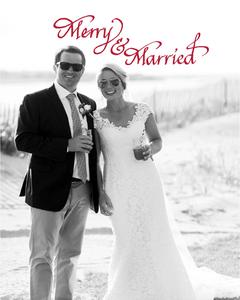 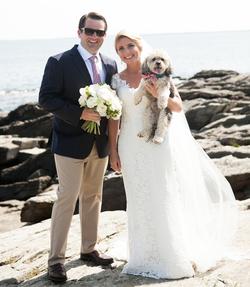 ​​​​I was honored to be such a huge part of Kristi and Bobby Mahoney's wedding in Prouts Neck, Maine, in June 2015. Kristi was gracious enough to send me all of the wonderful photos taken by her amazing photographer, Geneve Hoffman, and to allow me to create a page here to showcase all of the Janscript touches that were integral to the wedding weekend. We met for the first time, through a mutual friend, in the fall of 2014, when Kristi arrived at my house with two canvas bags full of stones that were going to become the escort cards 9 months later. We sat down for several hours and started planning the invitation, which was to be designed by me and printed by Crane & Co., whose line I carried at that time. Weeks of drafts followed, and we landed on a motif with Kristi and Bobby's first initials, which, to my delight, became the theme for the entire event and was reproduced on more items than I could imagine.

Since Kristi chose two lettering styles for the invitation suite, I came up with the idea of combining the two styles on the addresses as well, using Janscript for guests' names and Finehand for their addresses, and centering the addresses on the envelopes. I matched the ink color (Crane Regent Blue) for the addresses. Soon Kristi asked me to order correspondence cards with what had become "the logo" for the couple to use as thank-you notes and for us to use for various signage at the reception. Before long, my husband and graphic designer was making the logo into versions for napkins and tote bags, and a friend who runs the custom print department at a Papyrus was calling me to confirm the ink color because one of the wedding guests was ordering cards for the bridal shower and wanted them to match the invitation color.

As the big day approached, my husband Paul and I collaborated on a menu and program that were part calligraphy, part typeset, and those were beautifully printed by Checkerboard, Ltd., which I am proud to carry as a dealer, as well as a two-sided typeset map and weekend schedule. On some of the correspondence cards, I lettered signature cocktail cards for the bars (and even got to name one of the drinks!) and little poems for the flip-flop and pashmina baskets.

And the rocks! Those two 25-lb. bags of rocks that Kristi had brought in September came up out of my basement, and I got to work on the seating "cards." On some of the leftovers, I drew the infamous logo. I couldn't wait to see how it all came together, and I must say that the photos surpassed my wildest dreams. Of course, it helps to have such photogenic subjects as Kristi and Bobby and their friends and relatives (and adorable dog, Jackson, who came to one of Kristi's meetings with me), but Geneve really captured the joy of the day and showcased my work more beautifully than I could have hoped for.

I asked Kristi for a list of her vendors so I could advertise them here. Everyone did a spectacular job, and I'm proud to have been part of this crackerjack team! Thanks, Kristi and Bobby, for including me! xoxo

P.S. My husband and I were thrilled to design Kristi and Bobby's first married Christmas card through our business, Tuxedo Designs. Once again, the gorgeous photo of the gorgeous couple was taken by Geneve Hoffman Photography.